The A3: TQM in a red dress, part II--going to gemba

Purveyors of the A3, including myself, are constantly pushing clients to "go to gemba". Is this unique to the A3? Or to Toyota?

Going to gemba is just a trendy way of making direct, empirical, scientific (one hopes) observations. Going to gemba a part of learning to see.

Empirical observation dates back to the very beginning of the science, with roots in the philosophy of Aristotle. Most historians point to Francis Bacon, who, during the reigns of England's Elizabeth I and James I, codified the scientific method of induction in Cogitata et Visa (1607) and Novum Organum (1620). Also the Stanford Encyclopedia of Philosophy entry on Bacon for particulars. Others point to Leonardo da Vinci, who one hundred years earlier developed the habit of looking at nature and recording what he saw when most people were reading the new translations of ancient Greek and Roman classics.


I have been to Leonardo's gemba, courtesy of a client in the city of Florence, Italy. 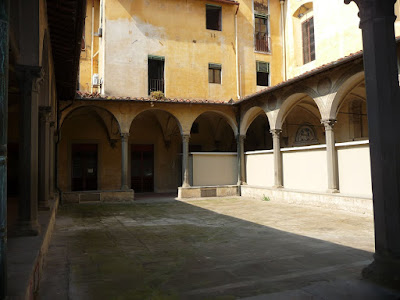 The client, Ospidale Santa Maria Nuova, is an historic hospital only a short walk from Brunelleschi's famous Duomo. The hospital was built in the early Renaissance with money donated by the father of Beatrice, Dante's inspiration for The Divine Comedy.

The Ospidale's chief medical officer at the time, Dr. Teresa Mechi, had attended a workshop on the A3 and hoshin kanri that I had given in Vicenza a year before. Dr. Mechi invited me to visit the hospital to inspect their A3s and to see the work that the hospital's lean team had completed in the operating room and inpatient units with the help of the Lean Enterprise Academy's Ian Taylor and Marc Baker (authors of Making Hospitals Work (Lean Enterprise Academy)). I was impressed.

At the end of the tour, I was asked, "Dr. Jackson,  We have a sub basement. Actually, it is more of a sub-sub basement. It's where Leonardo da Vinci did his dissections. He was once an intern here. Did you know that? Special guests like to visit. National Geographic and several others. Would you like to see it?"

My wife says I talk too much; it's true. This time, however, I wasn't merely speechless, I was dumbstruck. Until I regained my senses and said "Si, gracie."

A group of ten people groped their way in the dark down the narrow staircase. The lights weren't working that day. The wiring looked dodgy. Once we reached the bottom, we snaked our way hand-in-hand into a dark chamber. Our guide fumbled with old switches. The lights came on. Here is what we saw. 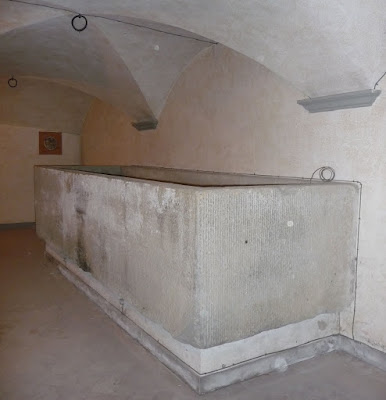 This is where Leonardo performed his highly illegal, dangerous and accurate work. In the vaulted room, there were three identical granite vats, each about 6 feet wide and perhaps 18 feet long. Back in the U.S., upon seeing the photo, the chief nursing office of San Francisco's leading hospital speculated that bodies were stored here, wrapped in linen. Was there once a wooden cover? Were the rings used to haul up the corpses? Who held the torches? What did Leonardo see? Some say Leonardo's drawings are so accurate that they compare favorably to modern day scans.... 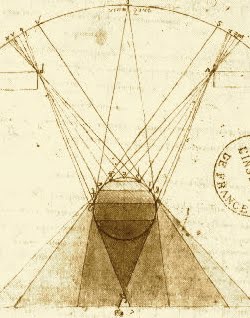 We safely may conclude that going to gemba is not unique to the A3 or Toyota. The intensity of Leonardo's gaze, not to mention the perfection of his freehand circles, make Ohno's chalk circle look like child's play. Empirical observation is a precursor of not only the A3 but of PDCA, TQM and lean itself.

In part III of this blog series, we will take a look at the A3 and its relationship to coaching.

In his indispensable book, Managing Quality Fads, Professor Robert E. Cole, emeritus of UC Berkeley's Haas School of Business, wrote about how the world outside of Japan has taken decades to implement Total Quality Management (TQM)--in the form of consulting fads. Of these fads, Six Sigma is perhaps the best known, but there were many others: Kepner Tregoe, Shainin's Red X, the Nolan cycle, should I go on?

And now there is the A3. In the past ten years, a plethora of books about the A3 purport to teach us how to use TQM's Plan Do Check Act (PDCA) cycle to manage everything. See, for example, my own Hoshin Kanri for the Lean Enterprise (Productivity Press, 2006), Pascal Dennis's Getting the Right Things Done (LEI, 2007), John Shook's Managing to Learn (LEI, 2008), Smalley and Sobek's Understanding A3 Thinking (Productivity Press, 2008), and Shook's 2009 Sloan Management Review article, "Toyota's Secret: The A3 Rerport," Today the list continues to grow.

Is the A3 something new? Or is it just another in a long line of TQM fads? This blog will examine some of the evidence. We begin the inquiry with PDCA.

The A3 and the PDCA cycle

On its face, the A3 phenomenon appears to be a TQM fad because of its self-proclaimed link to the Deming cycle. One would think that we had learned how to use PDCA almost ninety years after Walter Shewhart's memo on statistical process control appeared at Western Electric. Apparently not. Restating PDCA as Six Sigma's DMAIC or as the steps of CEDAC or the steps of Kepner Tregoe or the steps of any other pragmatic adaptation of the scientific method have not sufficed either. There are still quite enough people in the world who need to learn PDCA to support another...TQM fad.

Besides the obvious, what does the A3 owe to TQM? There are at least five additional dimensions to the A3 phenomenon that bear a striking similarity to TQM. In subsequent posts I will explore the A3 and TQM in the light of:
Tom Jackson
Portland, Oregon
26 April 2016
Posted by Tom Jackson No comments:

Back from the Healthcare Wars

After a very long hiatus, during which I have been laboring with my partners to transform our troubled healthcare industry (see http://ronaconsulting.com), I am recommitting myself to THE A3 POST, my blog about hoshin kanri, A3s, strategy, lean finance and accounting, problem solving, the universe and everything else.

Here are a just a few of the topics I intend to blog about during the next weeks and months:
Join the fun. Comments welcome.


Posted by Tom Jackson No comments: